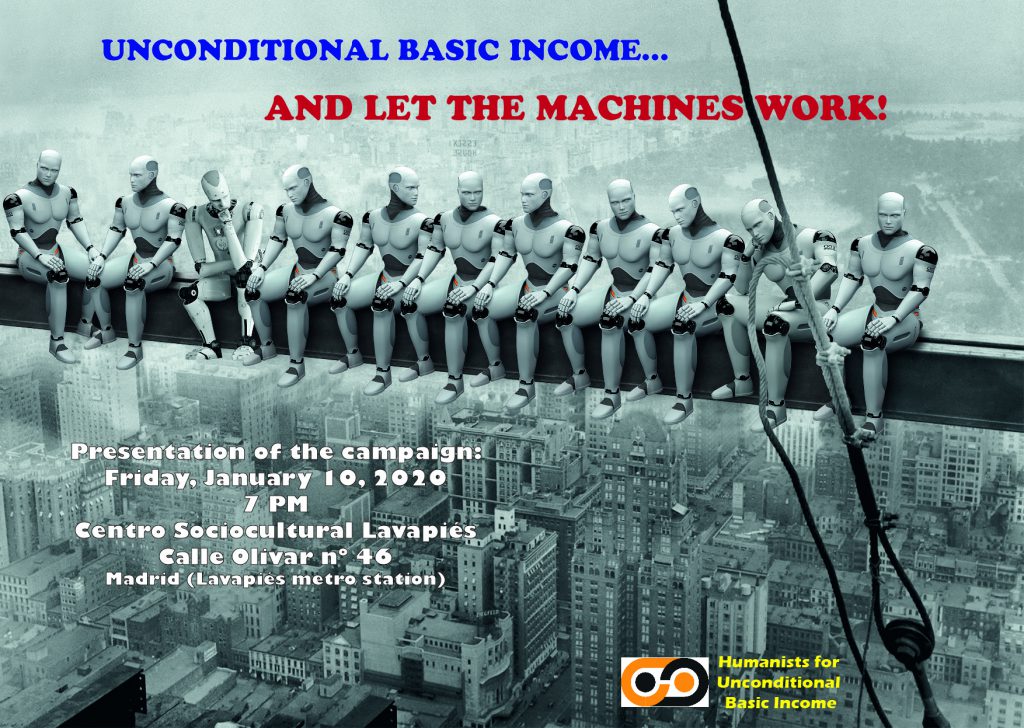 The aim of the "Unconditional Basic Income… and let the machines work!" campaign is to show that the old equivalence between employment and subsistence no longer works, because the advance of capitalism needs less and less human labour for the creation of wealth, due to the rapid advance of technology. In order to avoid the exponential increase in poverty and the inequality that this trend would bring with it, new economic alternatives are needed at this time in history that do not discard human beings, or that allow them to live with dignity even if they do not have a productive job. Therefore, we link this campaign with the need to implement a Universal and Unconditional Basic Income (UBI).

Another objective of this campaign is to question the centrality of work-employment in the lives of human beings. We do not believe that employment gives meaning to human life. Moreover, we think that machines can replace man in a multitude of exhausting, repetitive, inhuman tasks, put at the service of the consumerist and exploitative machinery of this monstrous economic system. People must devote the time of their lives - the only chance they have - to much more rewarding tasks that can give meaning to them. We need to find the purpose of our life, our vocation, in other words. Because it is through the development of our own vocation that we can contribute more to society and, in short, how we are going to feel more fulfilled, happier.

Of course, the latter is only possible if people have the material and existential conditions necessary for it, for example, if they enjoy an economic security that gives them enough peace of mind to consider in what conditions they want to live. A UBI for everyone would undoubtedly make it possible.

This campaign, therefore, is a torpedo aimed right at the waterline of this system. And it can serve to destabilize the set of basic beliefs that sustains and justifies the dehumanized current paradigm. In addition, it is a campaign in favor of the evolution of the human being, in favor of the transformation of this one in a free being, coherent and solidary with the other human beings.

And directly related to the previous campaign, we will also actively participate in the collection of 1 million signatures during one year in the European Union, to get the UBI discussed in the European Parliament: this is the European Citizens' Initiative (ECI) for an unconditional basic income, whose proposal text will be submitted at the end of January 2020 and which will start on May 9, 2020, if the ECI proposal is approved by the European Commission. This ECI provides us with an excellent opportunity to put the UBI issue at the forefront of the social debate, achieving greater dissemination and more correct information on the issue, as opposed to the silence, in some cases, or the biased and inaccurate treatment with which this issue is covered in most of the news on the subject. It should be noted that, to carry out this ECI, we have the online signature collection tool enabled by the EU, which is very helpful.

We encourage you to attend the presentation of our campaigns and to support them in whatever way you like. We look forward to seeing you!